Rihanna has reportedly taken her father to court in the US, accusing him of exploiting their family name to further his entertainment business. The popstar, whose full name is Robyn Rihanna Fenty, filed a lawsuit against her father, Ronald Fenty, after he allegedly falsely claimed that she is affiliated with his firm, Fenty Entertainment. 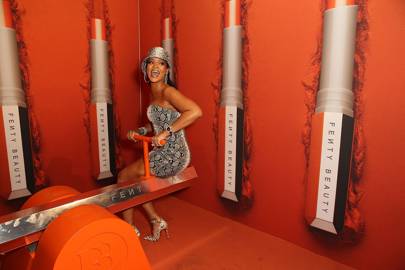 The lawsuit decrees that Rihanna owns trademarks in the US for the Fenty name and has sent formal "cease and desist" requests to her father, according to the BBC. "Defendants continue to this date to use their misrepresentations for their commercial advantage and to mislead the public," it continues. "This fraudulent conduct harms not only plaintiffs but the public at large and requires judicial intervention."

Fenty, who launched his business in California in 2017 with business partner Moses Perkins, has also been accused of attempting to negotiate a tour deal for his daughter for more than $15m, despite having no connection to her business. "Although Mr Fenty is Rihanna's father, he does not presently, nor has he ever, had the authority to act on Rihanna's behalf or had the right to use her Fenty mark, to exploit the goodwill of her Fenty brands or to solicit business on her behalf," the lawsuit continues.

The “fraudulent conduct” poses "serious irreparable injury" to Rihanna’s Fenty brand – comprising Fenty Beauty, which the performer launched in 2017, and Savage x Fenty lingerie, which was born in April 2018. Both strands of her business have been widely credited for having a positive effect on the consumer landscapeowing to the all-inclusive retail models that underline them.